As part of Amazon's Free Book Promotion program, I have scheduled the ebook edition of my science fiction novel ALIEN BEACH to be available for FREE during a limited period:
Dec. 24, 2017 - Dec. 28, 2017. 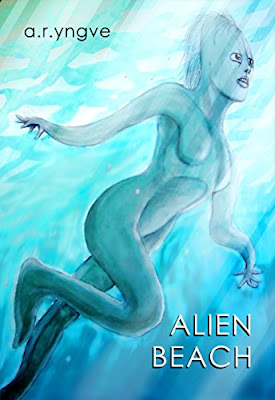 About the novel ALIEN BEACH:

Originally written in 1997, this novel deals with the effects of an imagined "first contact" with extraterrestrial visitors (if it had occurred in the late 1990s).

The story has two parallel plotlines. The first one involves an international team of scientists who study the small group of alien visitors, stationed on a secluded Pacific atoll. The second plotline follows a lone, possessed (or perhaps crazy) man who is trying to get in touch with the same aliens.

The amphibian aliens are physically not extremely different from humans. But their minds are profoundly different, and the human characters in the story struggle to understand the aliens' thinking and philosophy.

And even though the alien visitors are peaceful, their very presence triggers a global "culture shock" -- which may lead to an all-out nuclear war.

ALIEN BEACH was originally posted on my first webpage in serial format in 1999. This is the definitive edition of the novel.

You can read a sample of the first ebook chapter HERE.

ALIEN BEACH is also for sale in paperback format on Amazon.
Posted by A.R.Yngve at 8:09 AM