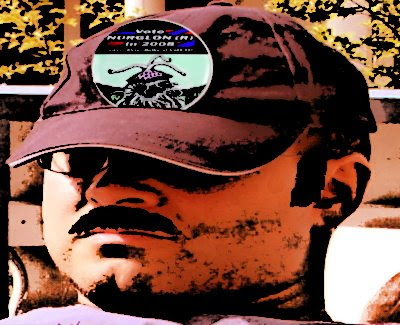 Joe-Bob Sispak, interviewed by POX News' Sean Inannity in the Very Deep South, Oct.10:
Sean Inannity: Joe-Bob... you and your friends, die-hard Nurglon supporters, are saying that Barack Obama is a witch.
Joe-Bob Sispak: Yeah!
(Voices in crowd: A witch! A witch! Burn'im! Burn the witch!)
S: But how do you know he's a witch?
J: He turned me into a newt!
S: A newt?
J: (Pause) I got better...
S: It does look like Obama is going to win the election. Do you expect your candidate, Nurglon, to bow out gracefully?
J: No! Nurglon must win! She's the only one who can save us now!
S: From the economic crisis?
J: No, ya dope! From the elves!
S: The elves??
J: Yeah! See, Nurglon's been givin' us a few hints who's really behind them bad loans and risin' prices and stuff! It's all the work of a global conspiracy of elves! But Nurglon's gonna eat all the elves and then the problems are going away! Nurglon forever!!
(Crowd cheers)
------------------------
Nurglon Speaks...
Nurglons Slams Obama...
Nurglon Denies...
Posted by A.R.Yngve at 8:17 AM