Quote: "Phony Review Writers Are The Dumbest On The Planet"

The above quote is taken from a discussion thread on the ASIMOV's Messageboard.

Phony book-reviews on Amazon.com are legion - but they are easy to spot. So why are they so badly written, so tacky, so transparently fake?

Because of stupidity. If a writer is so dumb as to not see the faults of his self-published books, he will be more than dumb enough to think he can write fake self-praise and get away with it.

It's like the old joke: "Why did the idiot jump from the Empire State Building? He wanted to be a big hit on Broadway."

How to spot phony reviews:
* Look for absurd comparisons like "Better than Harry Potter!", "up there with the Bible!";

* Fakers use weird phrasings like "the conclusion is implosive" or "this year's classic" or "philosophically action-packed";

* ANY book review that trumpets a book's great philosophical breakthroughs is a bit suspect;

* If you compare the reviewer's OTHER reviews, they are the same inflated praise of one single writer;

* The reviewer uses reviews of famous writers (such as J.K. Rowling) to sneak in "plugs" for the writer he fakes for (i.e. "Harry Potter is not as good as this book by X");

* The reviewer's name sounds phony, or he uses a pseudonym;

* He consistently gives 5 stars out of 5 for every book by a single writer.

If you are even THINKING of writing phony reviews of your own stuff... get out of my blog right now!
Posted by A.R.Yngve at 2:32 AM No comments:

I'm sitting here by the computer, while the TV is showing an old BONANZA episode in the background... and suddenly it hits me:

The Cartwright Family is living in the most violent place on Earth.
I mean, people there get shot to death or otherwise killed EVERY WEEK! And it all happens in one small region of Nevada between Virginia City and the Ponderosa ranch.

Their ranch is supposed to be near Virginia City, Nevada, in the late 19th century.... but it looks much more like Bogota, Colombia, today. The Cartwrights are a regular death squad! They must have killed more people than Wyatt Earp. (If you're in a morbid mood, search on Wikipedia how many characters got killed over the course of the entire BONANZA series...)

If one watches a whole season of BONANZA, one gets the impression that every dysfunctional family with a violent patriarch, every gang of bank-robbers and cattle-thieves, every rapist, cutthroat, lowlife and scumbag, is just flocking to the Cartwrights' spacious back yard.
(Which begs the question: why don't the Cartwrights move to a more peaceful county?)

And if we were to take the BONANZA Situation realistically, all this violence would have consequences:
1. Law-abiding families and businesses would move out in droves, making Virginia City an
impoverished slum -- or worse, a ghost town;

2. The local Congressman would go to Washington, D.C. and ask for Federal intervention: "Every seven days it's the same -- The Cartwrights kill people! We need a permanent U.S. Cavalry base to keep the order in this den of crime and gunfire!"

3. Someone would start a criminal investigation of the Cartwrights: "The whole area is littered with spent casings from Colt cartridges. A firing test shows that they match the guns of the Cartwright brothers. Take'em in for questioning!"

4. The psychological stress of living in this world of almost constant shootings, beatings and deaths would cause the brothers to go crazy, suicidally depressed, or psychopathic. But considering the ease with which they kill people and shrug it off -- plus the fact that all their girlfriends get killed or escape -- they may always have been psychopaths.

Jokes aside... this is a generic plot problem with almost any TV series, and sometimes shows up in novels too. If you concentrate too many dramatic events in a very small time and space, the plot becomes too far-fetched. (*COUGH*24*COUGH*)
(The exception is if the story is meant to be comedy, spoof, send-up, camp or satire.)

Now, the real reason why TV shows have too little "space" for the action is that locations and sets cost money. Money is the big "hidden variable" of television, and causes TV scriptwriters great headaches:
"How can we afford to send our heroes to Paris this week? I know: Let's skip new locations and travel entirely! We'll have everything happen in L.A. in realtime!"
(And thus, 24 was born...)

Written fiction, on the other hand, can afford its characters to travel around a lot more. And travel itself extends the time of the story, which eliminates much of the "time-compression" problem seen in BONANZA and other shows. (*COUGH*24*COUGH*).

Even so: novel writers watch TV (I do -- way too much ;-)), and thus they might pick up some bad plotting habits from television writers.
You shouldn't compress too much action and plot into too little space and time.
In the real world, the space of a normal human lifetime includes very few dramatic events like fights, violent deaths, dramatic accidents and such.

If you want to write a plot full of action, you must set up a situation in which this makes sense. (War is one such situation where lots of drama and violence is credible. Other situations with dramatic potential are revolution, social upheaval, or natural disasters.)
Posted by A.R.Yngve at 1:57 AM 6 comments:

Jonathan Sherwood, an American writer who's been published in ASIMOV's, has a great column on writing. If you are the least bit serious about writing fiction, read it.

The Soundtrack Of Our Lives

Tell you a secret: I don't really write stories.

I make music videos in my mind.

Then I try to transfer them into written text. (It doesn't always succeed.) The result is a novel, or short story.

That's why I almost never write a longer story or novel without listening to inspirational music. It's the soundtrack of the video I'm composing in my head.

(You should ask other people who write, if they also work this way... I'd really like to know.)

Right now I'm listening to Robyn's latest album, and thinking: "Now, what stories would go with these songs...?" I'm sure I'll think of something. (Thanks, Robyn.)
Posted by A.R.Yngve at 5:22 AM 3 comments:

Actual Quotes From The Slushpile...

Whenever my confidence in my writing abilities gets low (such as when I proofread my own stuff), it helps to think that many others are more confident but less talented...

Look at these actual quotes from the slushpile of magazine ASIMOV's Science Fiction. You can't make this stuff up! (From the blog of Miss Snark, the literary agent.)

My favorite quotes from the collection:

"Weston was known for the firm but genital hold he had on his men. It was one of the reasons he was chosen for this mission over six other equally qualified men. "
(Ouch!)

"The two naked bodies, which were lying beneath the satin sheets, were no longer the people whom everyone, who was anyone, knew whenever reality was in existance. "
(Say what??)

"Sudenly, all the eyes in the room rose from their fixed positions on the floor to stare at him. "
(That last one MIGHT have been quoted from a science-fiction story about a planet of living floors... but I'm not sure. ;-))
Posted by A.R.Yngve at 9:27 AM 1 comment:

The Perfect Clock For Writers Who Procrastinate... 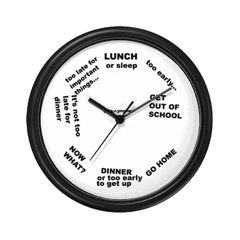 I designed this novelty item for my CafePress shop: the Wall Clock For Lazy People. Perfect for writers who procrastine! Instead of numbers, it has captions like "LUNCH", "TOO EARLY..." and "TOO LATE FOR IMPORTANT THINGS."
Posted by A.R.Yngve at 9:07 AM No comments:

Writers who are experiencing their first success must be prepared for humiliating experiences.

Well-meaning persons will ask you things like, "So you'll be rich now?" (Though I think that's thinly disguised sarcasm.)

Tobias S. Buckell and Justine Larbalestier share their humiliations with us. I salute their courage.
Posted by A.R.Yngve at 1:37 AM No comments:

I've been interviewed in BLOGGASM.
Posted by A.R.Yngve at 1:27 AM No comments:

1. Lose 10 kilos overweight.
2. Finish my first "military SF" novel, THE TALE OF THE SOLDIESSE.
3. Get more fiction published in China.
4. Start working on my third TERRA HEXA novel to come out in Sweden.
5. Sell my first TERRA HEXA novel to a publisher outside Sweden (perhaps China???)
6. Sell my SF movie script, THE FATHER MACHINE.
7. Start working on an SF novel for the India market.
8. Piss on Saddam Hussein's grave. ;-)
9. Get a new girlfriend.

Aaand...
10. Read through my pile of unread books and magazines.