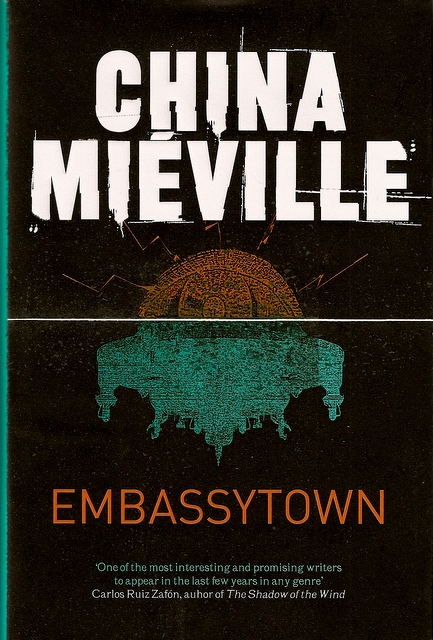 I struggled to finish this novel, as it tended to drag... and also because of my doubt that its central premise might possibly be wrongheaded.

When I finally got to the end, I felt reassured that EMBASSYTOWN wasn't a dud, and there were some really enjoyable parts.

EMBASSYTOWN deals with linguistics and consciousness – i.e. how language itself shapes our awareness of the world and ourselves in it.

”Embassytown” is a human settlement on a planet where humans try to co-exist with an indigenous alien species, the Ariekei. These aliens have a concept of language that is radically different from all human communication. The Ariekei way of speaking is difficult to explain – and because of this complexity, I soon started to doubt: Are these aliens really credible?

At times, I wondered whether the Ariekei would end up like the aliens, robots and computers in 1960s TV shows that break down if you tell them a paradox or just ask ”Why?” It didn't turn out that way, fortunately, and the Ariekei were allowed to evolve to an impressive depth.

Stylistically, EMBASSYTOWN is slick and has an original ”writer's voice” which I like. There are neat typographic tricks to convey alien speech (and which probably can't be translated to an audiobook). The imaginative depiction of alien environments and characters are the best parts of this book.

But then comes that nagging doubt... are the Ariekei possible?

Of course science fiction should present aliens that are ”different” – it's just that these particular aliens are given such a glaring weakness, and at the same time have advanced biotechnology.

(Okay, we humans have our own glaring weaknesses, so who are we to say that a fictional alien intelligence is ”inconsistent” or ”too vulnerable”?)

I'm still not entirely convinced the alien language in EMBASSYTOWN really is logically possible. Perhaps a professional linguist could analyze it and explain.

(Side note: I had similar issues with Peter Watts' novel BLINDSIGHT (2006), but that one was worse. It proposed an alien species I struggled to find credible, because the author claimed something very important about these aliens but then couldn't prove it. BLINDSIGHT resorted to a ”straw-man” argument to prove its premise, which unfortunately undermined the premise itself – seriously, vampires as an example of alien intelligence? In a science fiction novel? – but that's the subject of another review. End of side note.)

There is also the problem that the novel meanders. It could have benefited from tighter plotting and fewer secondary characters. I skimmed several passages, something I rarely do. But it arrived at a satifying conclusion.

Criticisms aside: I admire the author's skill, and his daring exploration of language, and that made the novel worth reading.

EMBASSYTOWN is recommended for lovers of ”highbrow” science fiction, and for readers who want stories about strange alien cultures.