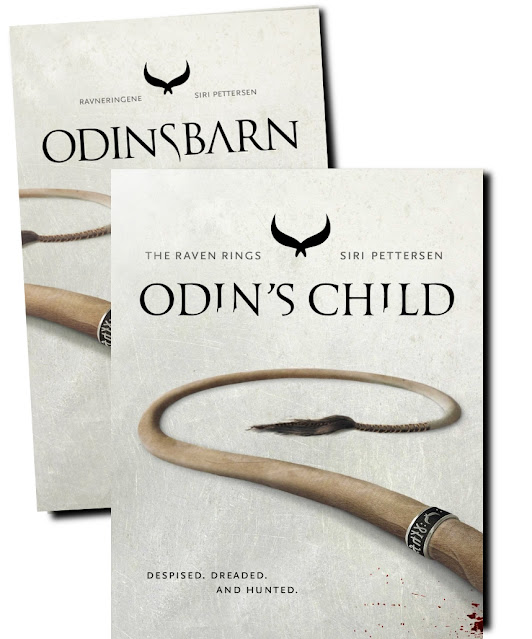 My book circle has made me read several American and British fantasy novels – some I enjoyed, some not – but at last we picked this Norwegian book, and I read the original Norwegian edition.

Speaking as someone who rarely reads modern fantasy, I think ODIN'S CHILD is very, very good. The novel succeeds stylistically; as good storytelling; as ”world building”; as an original work with a personal vision; in its portrayal of characters - and in the way it grabs and holds the reader emotionally.

Pettersen's style is both terse and expressive. Where many mediocre contemporary fantasy authors struggle with too many sentences to capture mood or meaning, Pettersen can nail it with a few telling details, a brief line – or just a few words.

There is very little ”excess fat” on her prose, yet it can say a lot. I find that level of skill admirable.

Her storytelling is unlike those brick-sized American fantasy novels I've tried to slog through, where the authors are incapable of ”cutting to the chase.” They tend to drag the reader through every single second of a scene, or flail about trying to find a way to end a scene, and I get bored.

Pettersen knows when to slow down a scene and when to cut to the next; when to get into small details and when to skip unnecessary details; making sure the reader doesn't get bored. Her narrative pacing is brisk but not hurried. That skill I admire also.

When it comes to world building, ODIN'S CHILD uses Scandinavian cultural roots and landscapes, mixed with Japanese-inspired elements - and the mix works.

I particularly appreciated that Pettersen can make the subject of magic – the prime element in all fantasy – mysterious and exciting. (Let's not name the bestselling American fantasy writers who are experts at making magic seem dull and mechanical.)

The protagonist Hirka is an unusual heroine in modern fantasy; she is neither ”the chosen one” nor does she have superhuman powers. From the very beginning she is an outcast in the world where she grows up.

Hirka has to make her own destiny in an often hostile world, and does so like a person who is forced to grow up too soon. Her personality is complex and mature for her age, and yet she is capable of youthful feeling.

The other characters are, in general, well written; none of them are without flaws. Only the heroic character Rime comes close to being a bit too spotless, and even he doesn't come off entirely uncompromised in the end.

The plot is different in depth from ”generic” fantasy; there is a complexity to the imagined world and its workings that colors characters and events in shades of gray. Fantasy may often be regarded as Young Adult material, but the psychological maturity of ODIN'S CHILD should appeal strongly to adult readers.

Finally, there is the emotional core of the story: the love story between the two main characters. This is the kind of romantic stuff that creates loyal readers and passionate fandoms.

The novel has an open ending that points to the next part of the RAVEN RINGS trilogy. I may have to read the other two books to see how the story ends (which is a highly unusual choice for me!).