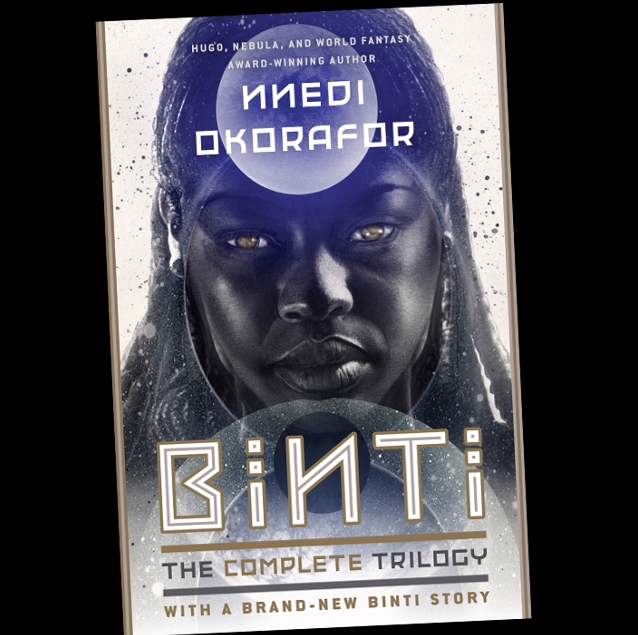 Book review:
BINTI: The Complete Trilogy (2020) by Nnedi Okorafor
The teenage girl Binti, raised in a backwater village in future Namibia, runs away from home to study at a prestigious university. Before she can reach that destination, she gets caught up in a blood feud between two opposing tribal peoples.
(How large the warring tribes are, and what distances separate them, is never made clear. This confusion about scale remains an issue throughout the book; sometimes the central tribal conflict seems very provincial, sometimes it seems to stretch into outer space.)
Binti barely survives a violent ordeal and takes up residence at the university – but she suffers lingering post-traumatic stress from what she has gone through.
She gradually recovers, befriends one of the hostile tribes and there is personal conflict when she returns home. Eventually she becomes a kind of supernatural savior figure in order to end the tribal war.
The entire plot hinges on not one, but TWO ”plot token” objects. One is magical, the other is an all-purpose healing factor that just happens to work on aliens and humans alike – and also doubles as a skin cream and tribal identity marker. That was a bit much for me to swallow.
There are parts of these stories that I do like. For instance, how the protagonist's relationship with her own kin gets messed up in an all-too-credible way.
I like that the protagonist can't just shrug off traumatizing violent experiences; like a real person, she is haunted by them. Perhaps other writers should take a lesson from this example (I stand accused).

I like that there are no white Western protagonists in the story – a welcome change from all the sci-fi stories where the entire populated universe is suspiciously WASP (White Anglo-Saxon Protestant).
I also like that the story complicates and questions issues of ”identity”; Binti does seem to learn that she can ”be” more than one single tradition, which is significant of moving from a tribal identity to an individual one.
There are, however, sophomoric writing flaws that the most rudimentary editing could have fixed. Plot points are repeated unnecessarily. The protagonist repeatedly obsesses over a single ”identity marker” until it starts to resemble a product placement – and becomes overburdened with meaning.
And there are instances of bathos. Such as: The teenage narrator waxes loftily in third person about what ”we people of the desert are like”. It may be intentional, to highlight the young protagonist's immaturity, but bathos makes me groan out loud.
This trilogy of novellas is marketed as science fiction, but it's ”sci-fi” mainly in the same sense as STAR WARS –  i.e. fantasy with spaceships and aliens and magic in ”sci-fi” clothing.
BINTI: THE COMPLETE TRILOGY reads like Young Adult lit. It's probably just my personal taste, but the narrative choice of a first-person perspective can test a reader's patience especially when the narrator is a teenager.
The book is perfectly fine for young adults who are into space opera and fantasy. I struggled to get into it, probably due to my age (I'm past 50).
NOTE: If you are interested in the African science fiction ”scene,” you should read OMENANA, the magazine for speculative fiction writers from across Africa and the African Diaspora. 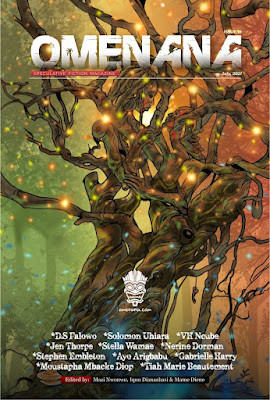