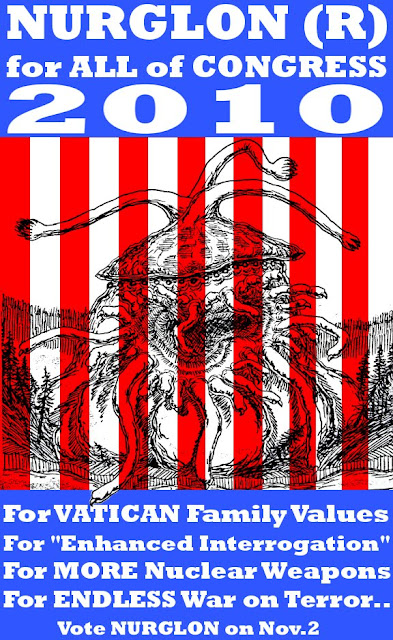 The new slogans appear made to match Nurglon's endorsement of the Pope and are consistent with her/its previous stance on waterboarding and war.

Nurglon: THE SHINING ONE'S DISARMAMENT AGREEMENT WITH RUSSIA MUST BE REVERSED! SUCH UNPATRIOTIC SOCIALIST DEFEATISM IS UN-AMERICAN... AND WORSE, IT MOVES THIS PITIFUL PLANET ONE STEP AWAY FROM THE ANNIHILATION OF THIS WEAK, DESPICABLE HUMAN RACE.

POX News: Don't you think the goal of "annihilation of the human race" might alienate many voters?


N: NOT AT ALL! THE POPE HAS PROMISED MY GOD-FEARING VOTERS SALVATION ON JUDGMENT DAY! ALONG WITH EVERY SINGLE BISHOP AND PRIEST! HA HA HAAAA!
Posted by A.R.Yngve at 1:43 AM