During the May 26th-28th weekend I visited Sweden's annual convention for Science Fiction/Fantasy fans: Kontur 2017 (that's "#swecon2017" in the hip jargon of those teen-agers). 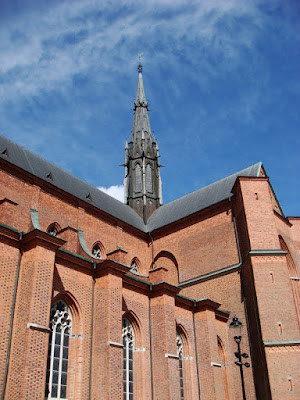 Kontur 2017 took place at Clarion Hotel Gillet, in the beautiful city of Uppsala. I didn't have that much time for sightseeing, but I visited the nearby medieval cathedral, to take photos and get inspiration.

This, kids, is what impressed people before we had smartphones: Architecture. >>>

I had two roles at the convention:

Because I had to attend my book table, I missed out on many interesting events, and most of Ann Leckie's appearances -- to my eternal chagrin.

But I did catch the dialogue panel "How To Write Male Characters", where Ann Leckie and Kameron Hurley riffed on all the dumb things they have heard about "how to write female characters" and "female writers".

Their take was to flip the gender on said dumb statements.
For example: "If you have more than one male character, it becomes a story only about gender!"
Or: "Every time I give male writers advice about how they should write male characters, they listen! I can tell they're listening, because they get very quiet."

Their sarcastic act was the absolute high point of the entire convention -- Leckie and Hurley had the audience roaring with laughter. (And may I point out: audience members of all genders laughed. The panelists also joked about themselves.)

Kameron Hurley is widely recognized for writing "grim and dark" Fantasy and SF (and it is -- I've read it). When I met her, she came across as a laid-back, humorous and warm person.

This bashful, stuttering fanboy asked the GoH if he could take a photo with her for his convention report -- and she gladly accepted. 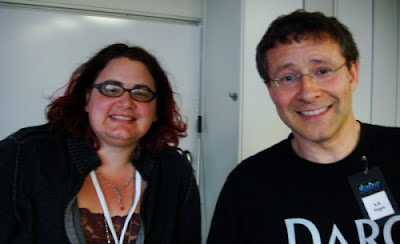 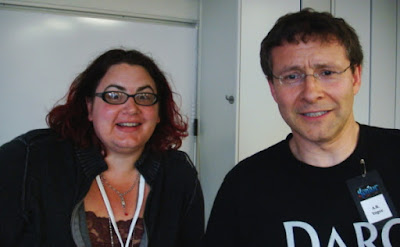 But Kontur 2017 wasn't all laughs and jokes. I did manage some serious stuff, such as the following panels: 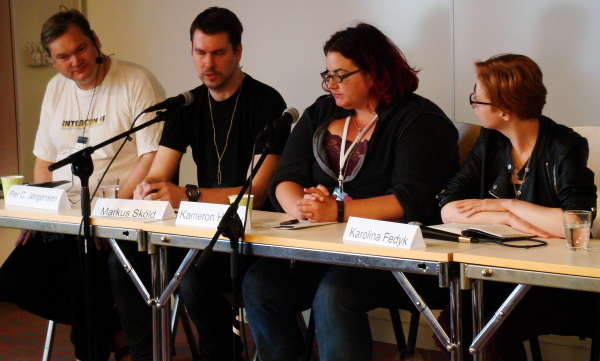 - "Fictitious Scumbags" (Panelists: Per C. Jørgensen, Markus Sköld, Kameron Hurley, Karolina Fedyk).
Authors discussed the fact that the "scumbag" characters tend to get readers engaged, and how hard it can be to write good "noble" characters. 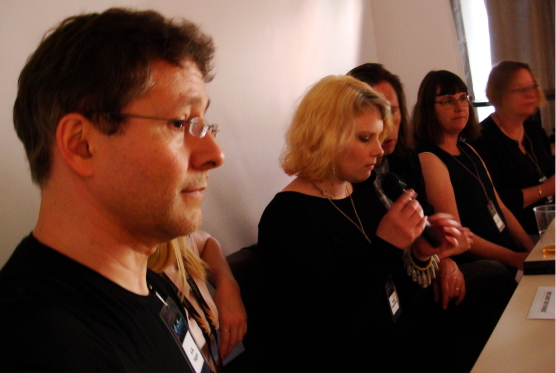 - "How We Do To Get Anything Written" (Panelists: Anna Vintersvärd, A.R.Yngve, Thomas Årnfelt, Eva Holmquist, Eva Holmquist, Nina J. Lux, Kristina Hård).
I got plenty of good writing advice, especially from Thomas Årnfelt. His most memorable quote: "It's easier to edit five hundred bad words than no words at all." (I.e. when you get stuck, write anyway. You can always improve on it later.) - "Marketing of Fantastic Literature in Sweden" (Panelists: Jenny Zunko, Eija L. Schüssler, Ylva Spångberg).
The panel members came from the areas of translation, publishing and bookshops. Each had something interesting and educational to say about the tricky marketing issue.
Notable comments:
-Fantasy literature is now "mainstream" and widely accepted for all ages in Sweden, but Science Fiction still meets some resistance among publishers, journalists and other cultural "gatekeepers". (Star Wars is its own category and doesn't count as "SF.")
-"Dystopias" are now a literary category in bookshops, and many don't think of it as "SF" at all.

- "Mad scientists 2.0" (Panelists: Torill Kornfeldt, Alice Hedenlund, Fredrik Silvearv)
Real scientists (who are also SF fans -- there's a considerable overlap between the communities) talked about wild, crazy and grand ideas. Which SF vision might soon come true? What real science sounds too incredible to be true?
There was much talk about space elevators. (I'm still too scared of heights to get into one!)

- Guest of Honor Panel: "On Worldbuilding" (Panelists: Kameron Hurley, Ann Leckie, Siri Pettersen, Nahal Ghanbari).
Hurley and Leckie had different approaches to worldbuilding. Leckie described hers as systematic (even including charts for traveling speed -- on foot, on horseback, etc.) , while Hurley's was less so.

Memorable quote (Ann Leckie): "Being a writer is like having homework for the rest of your life."

- "The Realism Conundrum" (Panelists: Siri Pettersen, Kristin Thorrud, August Aronsson, Lennart Jansson).
Historian August Aronsson made the very interesting point that depictions of "medieval" societies may get the physical details right, but often fail to describe the psychology of a different era. Writers tend to place "modern"-minded characters in an ancient setting. People long ago did not think the way we do today. 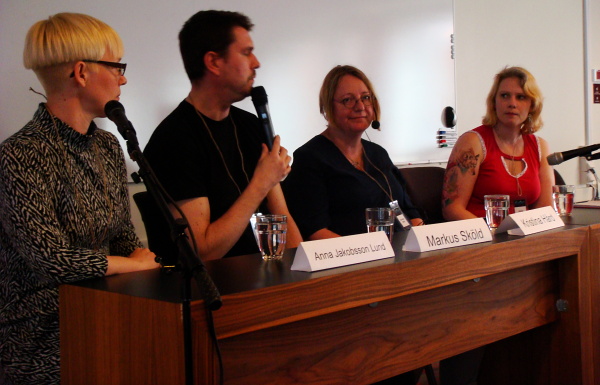 - "What Do We Do After The World Ends?" (Panelists: Sten Rosendahl, Boel Bermann, Oskar Källner, Katarina Norrgård, Elin Holmerin). The assembled writers discussed post-apocalyptic fiction and related dystopian fiction.
A rhetorical question was put to test the panel: "Is humanity worth saving?"
Oskar Källner replied yes: "We are the only ones we know who can ask that question."
Boel Bermann delivered a more ambiguous reply, roughly along the lines of: "We are worth saving, but we're going to screw up again." (I can't say I disagree...)

The panel seemed to be in agreement that even if civilization died, humans would still have stories and myths -- or make up new ones. Sten Rosendahl recommended the Swedish novel Toffs Bok. Boel Bermann mentioned Oryx and Crake as an example of humans making up new myths after an apocalypse. 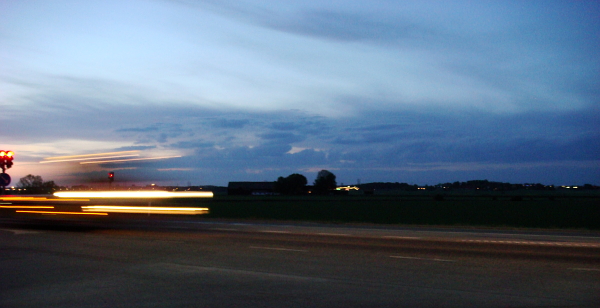 I'm usually the kind of shy guy who leaves the party early. Friday and Saturday night I went back to my cousin's place to sleep. Here is a snapshot of the road near my cousin's place, around 11:30 PM... and a passing UFO in the foreground.

Kontur 2017 was a great occasion to mingle, press flesh and chat with other SF/F fans. 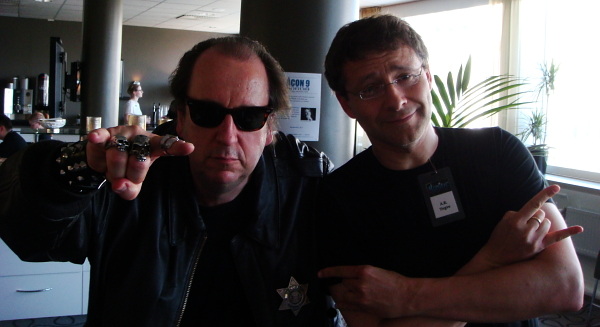 Anders Bellis and I discussed which rock musician should be in my next SF novel. "Marilyn Manson?" I suggested feebly. "Lemmy!" he replied -- and who could argue with that? 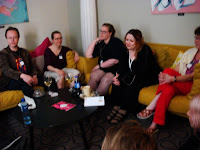 Small groups of very lucky fans got to partake in the scheduled "Kaffeeklatsch" events -- i.e. sitting down for an informal chat with the Guests of Honor. (Coffee optional.)

I managed to get a seat in the Kaffeeklatsch with GoH Siri Pettersen, a phenomenally popular Norwegian Fantasy author. Read her books before the movie version is released! 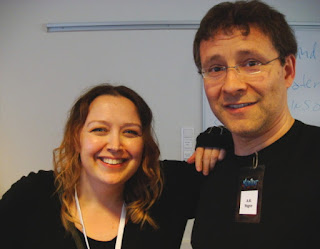 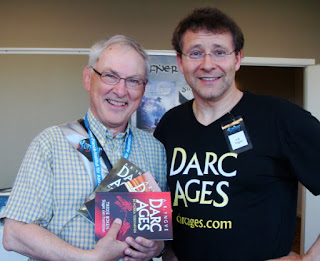 Poor Tomas Cronholm! Senior member of the convention committee, and editor of the long-running Swedish zine SF Forum. I hounded him ruthlessly -- "When are you going to review my books?" -- until he just had to buy the entire DARC AGES trilogy to get some peace. (He's putting up a brave face on this photo -- perhaps because he hasn't started reading the darned things yet. Oy vey!) 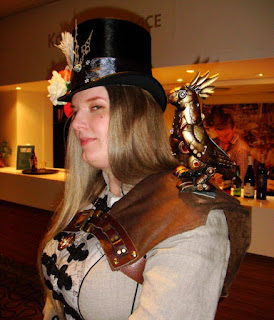 Hey... haven't I seen you and that mechanical bird somewhere before? That's right -- it's Kristin Thorrud, who I also met last year in Gothenburg at the steampunk convention SteamCon (see my SteamCon report HERE).

Since I took my time and spent three whole days at Kontur, I got to meet plenty of other visiting writers and artists. That is especially rewarding, since I rarely get to gather with colleagues, do "shop talk" and share experiences and advice.

Here are some colleagues I met at Kontur: 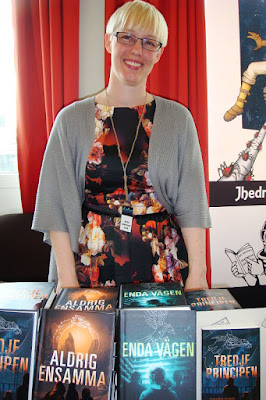 Anna Jacobsson Lund, who also took part in the panels (and provided much advice and inspiration)... 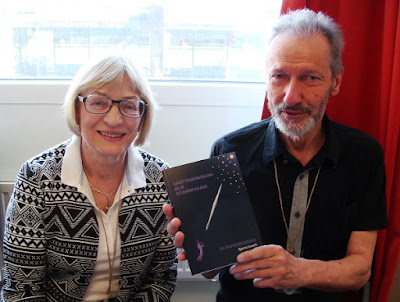 Bjarne and Anita Ismark from Finland, presenting Bjarne's debut SF novel Grottmänniskan Blir Stjärnfarare (they sat next to me in the Dealer's Room and we had several pleasant conversations)... 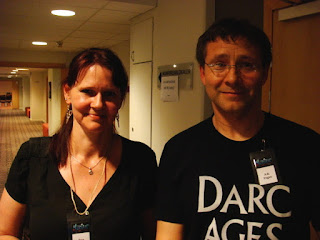 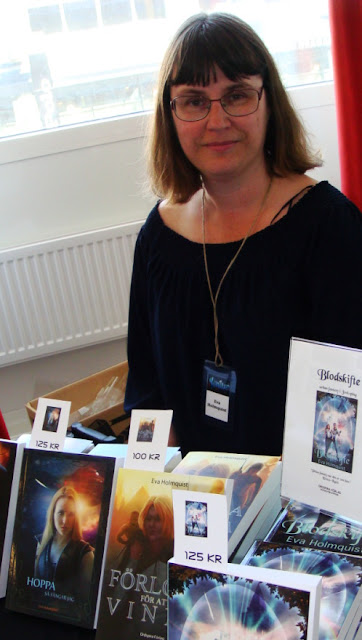 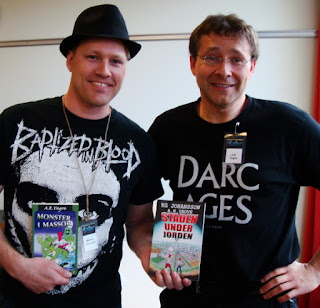 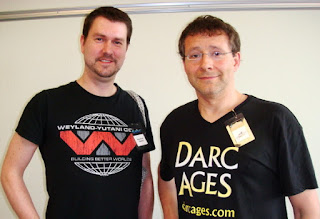 Markus Sköld -- a horror writer who is getting noticed for his novel Kalldrag...

(NOTE: You can't see on this photo that Markus is so tall, I have to stand on my toes.) 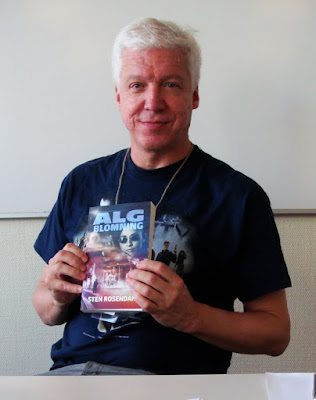 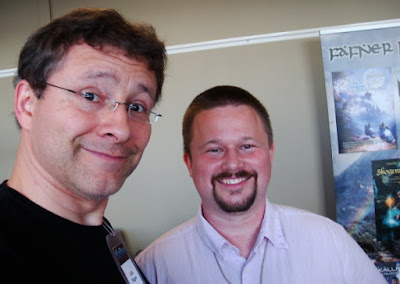 ...and Oskar Källner.
(Why do I have that goofy smile on my face? Because I'm standing next to Oskar Källner! He has that effect on people.) >>> 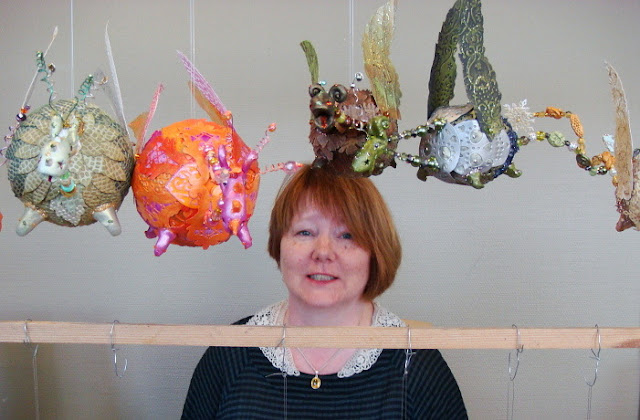 The roving shop Pappersdraken sold beautiful paper dragons. I should have bought one for my wife... 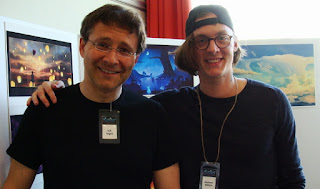 ...but since I'm clumsy and tend to drop and break anything that isn't flat, I bought her a fantastic art print from the amazingly talented artist Hjalmar Wåhlin (who traded the print for a copy of DARC AGES). >>> 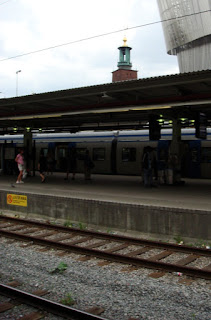 But before I knew it, it was Sunday afternoon... and I had to rush to the train station. I passed Stockholm on the way back to Oslo, and had a brief glimpse of Tre Kronor...
<<<

See you next year, people! There was universal agreement among the visitors that Kontur 2017 was an exceptionally nice convention. I would like to thank the Convention Committee for a truly outstanding job: 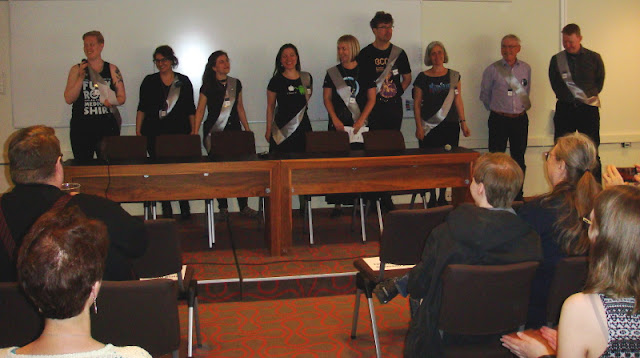 Let's also thank the army of volunteers ("Gophers" in fan slang) who did their part to make Kontur 2017 a benchmark event.

Extra shout-outs to: John-Henri Holmberg, Ben Roimola and Jayson Utz.
Posted by A.R.Yngve at 11:02 AM