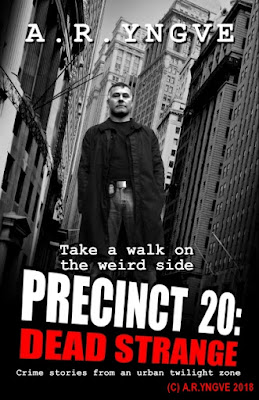 ”PRECINCT 20: DEAD STRANGE was born after I had tried, many times, to write conventional detective stories. I grew frustrated and bored with the rigid conventions of the genre. It was too predictable. Then it hit me: why not just break the rules? Suddenly I couldn’t stop writing weird crime stories,” explains A. R. Yngve.

”All stories in this collection center around the police detective Innis Garris, who works in the 20th Precinct of an unnamed American metropolis. Garris investigates homicide cases and suspicious deaths that are very strange, or hard to explain rationally, or may belong in a supernatural realm.”

”Innis Garris operates in a twilight zone between nightmare and reality, and often has to cover up or bury his cases, since he doesn’t want to be dismissed as a crank or a madman. He’s not perfect; sometimes he fails, and the job gradually wears him down.”

”Those who remember the classic 1970s TV show KOLCHAK: THE NIGHT STALKER will recognize the theme of the lone investigator working on murder cases that turn into horror or the fantastic. PRECINCT 20 : Dead Strange also shares a thematic similarity with THE X-FILES – the public has to be kept ignorant of discoveries that are too weird or unexplainable.” 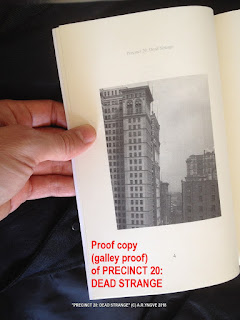 A professional graphic designer, Yngve illustrated the book himself – using archive photos from Library of Congress as source material. ”Old photos of New York, Chicago and other big cities, from the 1920s and 30s, provided some of the inspiration for PRECINCT 20: DEAD STRANGE. These early modern cities have an eerie quality – the buildings look like something out of a spooky dream.”

”The last mystery in this book, titled ’The Final Problem,’ is a shocker that might infuriate and disturb some readers. I should give sensitive readers a sincere ’trigger warning’: Read at your own risk. This book might get under your skin.”

The publisher / editor Cecilia Wennerström, who has released many of A. R. Yngve’s books in Sweden, says about his short fiction: ”The short stories of A. R. Yngve are fast-paced and wildly imaginative, casually mixing black comedy with genuine dread.”

The acclaimed Swedish author KG Johansson, author of the novel Googolplex and numerous other titles, has this to say about PRECINCT 20: DEAD STRANGE: ”Yngve's stories bring together the relentless logic of Isaac Asimov and the unpredictable weirdness of Philip K. Dick. A fascinating read!”

PRECINCT 20: DEAD STRANGE is released exclusively on Amazon.com, in paperback and ebook format, in May 2018.

A. R. Yngve has written many other books and short stories. His short story ”Quadrillennium” appeared in the acclaimed anthology Waiting for the Machines to Fall Asleep (2015); several of his stories have been published in Chinese magazines. He was born in Sweden, but is currently living in Norway with his wife and child.

A. R. Yngve will take part in this year’s annual Gothenburg Book Fair, in Sweden.

(Source: official press release)
Posted by A.R.Yngve at 2:16 AM