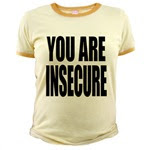 Seth Godin tells an anecdote, and concludes that: "So many of the products and services we use are now about our identity. "

It struck me, reading Godin's blogpost, that some readers use books as a part of their identity. (Especially "genre fans," but perhaps not only them.)

Of course, from his marketing-guru point-of-view, this is something to use and exploit to sell stuff. But that's where we part ways.

I like to read the fiction of American author Philip K. Dick. (Ah, so that's why some call me a "dick." ;-)) Does this make his works a defining part of my identity? How far could that "identity" go?

- Dressing up as favorite characters from Dick's novels at costume parties and events?

- Writing "fan fiction" featuring characters and settings from his works?

- Camping in ticket lines for NEXT (another movie based on Dick's stories)?

- Start believing that the author's stories are reality?

Naah! Why bother? What was it Chuck Palahniuk wrote in FIGHT CLUB?

It happens that people use their favorite books (such as a "holy book", or The Lord Of The Rings, or Ender's Game) to support their sense of self at volatile, vulnerable times in their lives.

That goes for writers too. You are not your favorite writer. You are not a genre. (You are not Chuck Palahniuk.) Don't trap your creativity for the sake of a narrowly defined "writer identity."

Buying or reading my books to express your identity probably doesn't work very well.
(By the way, I look forward to whether J.K. Rowling will try and write something completely different after her "Harry Potter" novels. What will she think of next? Isn't it more fun when you don't know in advance?)