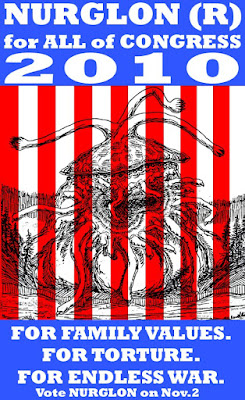 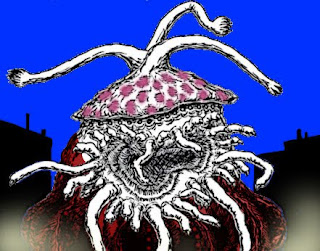 POX News, March 17:
While retreating from Capitol Hill, stating that her/its movement away from the building was merely a "temporary realignment," hundred-eyed politician Nurglon (r) made some rare and frank comments on the recent scandals involving the Pope and other Catholic Church officials.

In this transcript of a hasty running Q & A between Nurglon and POX News correspondent Sarah Tannin, Nurglon explains her/its stance.

Sarah Tannin: Nurglon, what is your religion?

Nurglon: I WORSHIP GREAT CTHULHU. BOW DOWN AND WORSHIP NURGLON, MISTRESS OF GREAT CTHULHU, LORD OF THE UNSPEAKABLE BEYOND!

ST: And what is your relationship to Earthbound religions like, say, Catholicism?

N: THOSE WHO DO NOT BOW DOWN TO THE ELDER GODS ARE ONLY FIT TO BE FOOD FOR MY SPAWN.

N: HOWEVER... I AM WILLING TO ALLOW THE VATICAN TO CO-EXIST WITH MY FAITH WHEN I AND MY SPAWN RULE THE EARTH.

N: BECAUSE I LIKE YOUR POPE! HE'S SUCH A CHARMER! HIS EYES REMIND ME OF GREAT CTHULHU'S! HE AND HIS MINIONS SHARE MY GOAL, TO CRUSH THE SOULS OF YOUR OFFSPRING AND TEACH THEM UNQUESTIONING OBEDIENCE TO POWER!

N: I WOULD GLADLY LET POPE RATZINGER AND CARDINAL BRADY LIVE FOREVER AS UNDEAD HUSKS, ANIMATED ONLY BY MY TIMELESS MALEVOLENCE, IF IT WOULD HELP ME CRUSH THE SOULS OF ALL YOUR WEAK, PITIFUL CHILDREN!

N: NO! DO NOT UTTER THE NAME OF THE BURNING LIGHT!

ST: What do you mean? Jesus Christ...

N: YOU SAID IT AGAIN!

The interview was interrupted as Nurglon began to spout smoke and fled the site. The Vatican has since refused to comment on Nurglon.

A cardinal who wishes to be anonymous said to POX News that "Nurglon is welcome to join our Holy Church, if she/it agrees to publicly condemn the evil of contraceptives".
Posted by A.R.Yngve at 2:53 PM No comments: