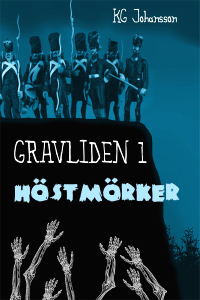 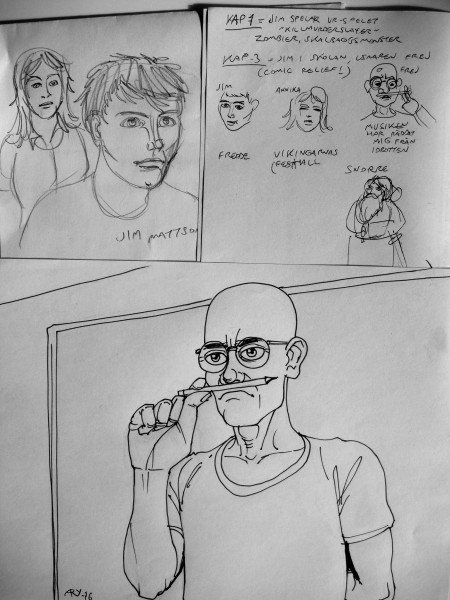 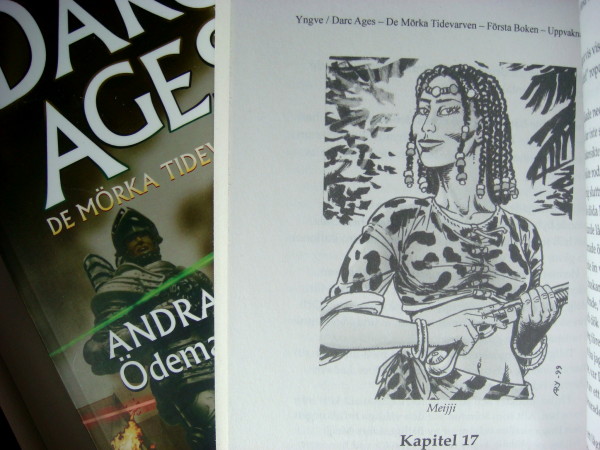 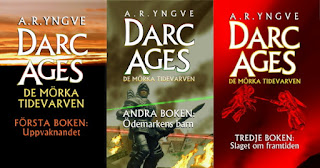 After being released in Swedish in March 2016, my trilogy DARC AGES is now being re-released in English. I shall explain the why and how...

First, a little back story:

It first appeared as an illustrated Web serial in 1999-2000.
(No, not on this webpage, but on my very first website with the overly obvious title "Read My Books For Free," which no longer exists.)

The Web serial and its illustrations were based on an insanely detailed synopsis for a graphic novel (which was never completed, but that's another back story which is explained in the Afterword to the published Swedish edition of the DARC AGES trilogy).

The Web serial got some positive reader responses. But still I struggled to find a publisher for the manuscript - so I tried several times to self-publish (through Xlibris, CafePress.com and Amazon.com). Self-publishing is not something I would recommend for beginners. The pitfalls are many, and I fell into several of them.

Then I set DARC AGES (more or less) aside and focused on other things. I got short fiction and books published "legit" here and there, and achieved a very modest degree of respectability as a "proper" writer.

Fast-forward to 2015, when my wife had reminded me many, many times that she enjoyed DARC AGES very much and I shouldn't give up on it. (Stephen King's wife similarly encouraged him not to give up on CARRIE. Writers need understanding spouses like fish need water.)

So I approached my Swedish publisher and proposed that I would translate the entire epic into Swedish for a re-release, with all the original artwork included - as an e-book, to minimize the financial risk.

To her eternal credit, the publisher said yes.

It soon dawned on me that the manuscript needed more than translation and proofreading. Parts of it felt rushed. The supporting characters were too sketchy. I added passages and improved old ones, and also made the same changes to the English version... in effect I was rewriting the same novel in two languages simultaneously.

Then I dug out my original artwork from the attic (literally from a cardboard box of drawings in the attic). Fortunately the ink had not faded noticeably, but the art needed some digital improvement.

So I scanned the original paper drawings, polished up the line art on my computer, added gray tones and created an entirely new book cover and logo.

My Swedish publisher was so impressed with the result that she released DARC AGES as a trilogy, not only as an e-book but also in pocketbook format. The Swedish release occurred in March 2016. (The earliest review gave the first part of the trilogy 4 stars out of 5.)

Now, at last, I have decided to release the entire revised, expanded 4th edition of DARC AGES in English on Amazon.com -- it's still self-publishing, but I feel that the "properly" published Swedish edition increases the "credibility" of the English version.
(Is that wrong? Then please write to "aryngve-AT-gmail-DOT-com" or my Facebook page, and explain to me why I ought to spend another sixteen years on finding an American/British publisher.)

First out is of course Book One, soon to be followed by Book Two and Three... and once the fourth part of the series has been released in Sweden, I intend to release it in an English translation as well.

Have a look at the first few pages -- and illustrations -- of the English edition HERE.

But what really matters to you, Dear Reader, is of course the question "Are these books any good?"

The very first review of the new illustrated 4th edition was positive:
-------------------
For some reason I get a nostalgic feeling when I read this. Perhaps it is the narrative momentum, or that the author has used classical SF symbolism. It may also be the illustrations that create an association to older SF stories.

It is an exciting book in an accessible, simple style. The latter is a relief because it seems to have become fashionable to write as long-winded and complicated as possible. Only what is relevant is described, the tedious parts are fast-forwarded. It's probably a book that even impatient people with reading difficulties could absorb without difficulty.

Darc Ages is a rather lighthearted adventure story where David gets to know the new world, impresses others with his knowledge and abilities, and in true heroic spirit tries to help the people who saved him.

On this blog I will tell you more about how DARC AGES came to be, and where it might be going. Watch this space...

ADDENDUM (Nov. 2, 2016):
Since this article was posted, Books I-III of DARC AGES have been released in Swedish and English. The fourth book in the series is being written.

Find out more at the official DARC AGES website.

The Best Autobiography EVER!

I'm reading a riveting life's story! Truly, this guy lived an interesting life. Just let me quote a brief passage from this must-read book:
----------------
A HAIRY LIFE
The autobiography of Chewbacca