Do Fiction Writers Have Moral Duties?

I ask you: Do fiction writers have moral duties?

1. Ah, but whose morals?
- A problem arises, in my view, when the most reactionary reader/critic/person demands that only his morals should be applied to literature. That is how we get absurd censorship cases where prissy people try to remove Shakespeare or Mark Twain from public libraries.

2. And duties to whom?
- To the person who actually reads the work? Or to every potential reader?
The second demand is sometimes made in the real world, but it is an absurd one. You cannot tailor every story to suit every 4-year-old reader who might come across it.
(Picture, if you can, a nightmare world where all the classics of literature have been rewritten for small children and that's all there is.)
People choose what to read. With choice comes the freedom not to read.

3. And shouldn't readers share the responsibility for how books are read and used?
Readers read, and they interpret the text (despite what fundamentalists will tell you, there is more than one way to read the meaning of a story)... so if writers are responsible for their words, then readers are responsible too.

I feel that I have some moral duties as a fiction writer. But I only have my conscience to guide me in this area.
My conscience tells me:
- Do not glorify evil
- Be honest
- Try to rise about primitive thinking and willful ignorance
- Avoid rigid dogma or fanaticism - people are more important than ideas
- Do not suck up to power

But you may think, why should writers worry about these things? Are stories really that much of a big deal?

Oh yes. The surest way -- perhaps the only way -- to get into a person's mind is to tell her a story. When writing was new, it frightened people: they saw its power to influence the minds of others, how it could move one person's thoughts into another person's head.
Since we take writing for granted now, we may have lost that insight.

A folk singer put the slogan "This Machine Kills Fascists" on his guitar. I might as well put a slogan on my PC or notepad: "This Machine Goes Straight Into Your Brain."
Posted by A.R.Yngve at 2:15 AM No comments: 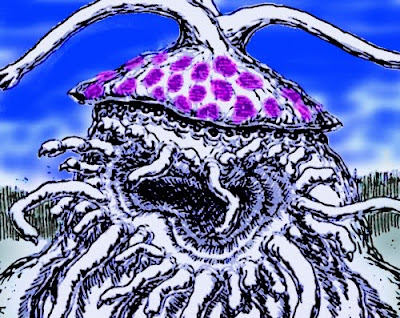 The resident Rage Party leader and Folksy Thing From Beyond, Nurglon (r) responded today to the aftermath of the "Ship To Gaza" shootings, in a statement to POX News:

Nurglon: I CONDEMN THE USE OF DEADLY FORCE AGAINST THE AID CONVOY -- THE FORCE WAS WAS NOT DEADLY ENOUGH! THERE WERE SURVIVORS! I WOULD HAVE USED A TACTICAL NUKE. BECAUSE, GOSH! I'M A MAVERICK!

POX News: Will the tragic incident lead to any sort of change in the current stalemate between Israel and the Palestinians?

N: GOLLY, NO! SO WHAT IS NEEDED IS ANOTHER AID CONVOY TO BOTH GAZA AND ISRAEL. A HATE BOAT! I WILL PERSONALLY GATHER THE RESOURCES TO SEND MORE HATE TO BOTH PARTIES, AND SEAL THEIR MANIFEST DESTINY. YOU BETCHA!

P: What do you mean by their "manifest destiny", Nurglon?

N: TO DIE IN A CAULDRON OF NUCLEAR FIRE WHICH WILL GROW, AND GROW, AND CONSUME THIS PITIFUL PLANET. AIN'T POLITICS, LIKE, FUN? GOSH!

Nurglon then interrupted the interview, and paraded before the media her/its latest offspring -- the adorable thing called H'Thffluh, which was born with the severe handicap of only having 50 eyes.
Posted by A.R.Yngve at 11:57 PM No comments: