My Report From The BOK & BIBLIOTEK Book Tradeshow (Gothenburg, Sept. 21-24) 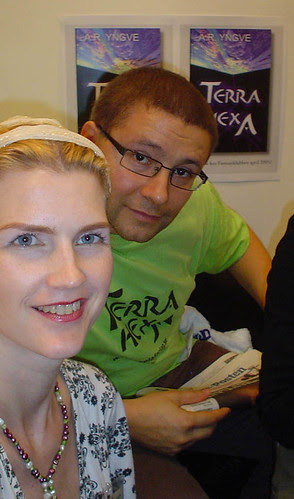 The BOK & BIBLIOTEK 2006 book tradeshow was a fun and inspiring experience. I met and talked to other writers - Richard Morgan, K G Johansson, Jorun Modén (pictured left), and Cecilia Wennerström.

I also met people who write about or publish my writings - Kent Björnsson from publisher Schakt; Lilian Wiberg and Robert Andersson from the magazine MITRANIA - and the very nice personnel from the shop SF-Bokhandeln (based in Gothenburg and Stockholm). People from the website Sci-Fi Nytt also dropped by say hello.

But most importantly... in my publisher's booth, and at the book-signing event at the booth of SF-Bokhandeln, I got to meet my readers face to face.

Most of the TERRA HEXA readers I met and talked to were in their lower teens - some no older than 10. It's my hope that they will follow the book series as they grow up.

I want to emphasize here, how important it is what readers say about books from small publishers.
Every reader matters!
Many of them think, "Nobody cares about my opinion."
Not true! Every little comment or mini-review of TERRA HEXA affects its sales and success. Only through the continued support of its fans can a book series reach a "critical threshold" where it becomes seriously profitable.
So if you want the TERRA HEXA series to continue past the third book, then please make your voice heard - on weblogs, messageboards, to your friends and libraries.

P.S.: And just like at last year's book fair, we had the traditional Weirdo Visit to the publisher's booth. (If a weirdo doesn't show up, I get worried... it doesn't feel like a real tradeshow without one.)

Eventually she left, visibly disappointed that we wouldn't admit our secret Norwegian citizenship. That was a close call. She nearly uncovered the Norwegian conspiracy to infiltrate Sweden's publishing industry!!
;-)
Posted by A.R.Yngve at 1:34 PM

A great post. Thank you for sharing it. Secretly Norwegian indeed!