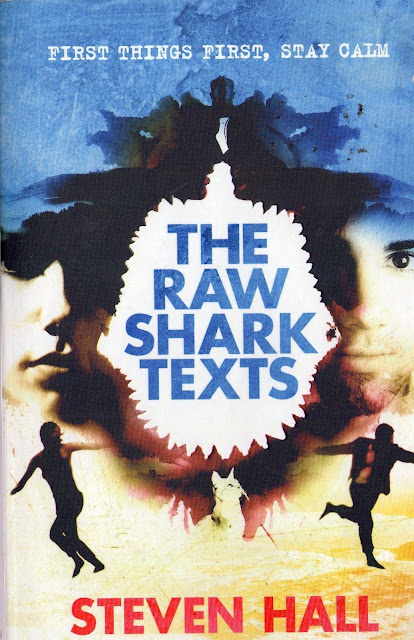 This is a very, very unusual novel. I like it.
I don't want to spoil the twist hidden inside... so let me just point out how the book uses typography, the letters themselves, to become part of the story.
It must have been hard work to create the typographic images on the pages (you probably should read it in print to appreciate the effect).

If you are open to something experimental, and you're prepared to be mystified, then you should read - or rather experience - this one-of-a-kind book.
And if you like it, do recommend it to others.

P.S.: But wait! It gets complicated: On the book's Wikipedia page, you can read this:

The Raw Shark Texts consists of 36 core chapters bound into the novel itself, and an additional 36 "lost" sections, known as "negatives" or "un-chapters" which exist outside of the main printed text.[4] These extra 'un-chapters' (also written by Steven Hall) have been found periodically since the book's initial release, hidden either online or in the real world. Unique negative content has also been discovered in several translated editions of the Raw Shark Texts since publication of the original English language edition in 2007.
#stevenhall #therawsharktexts #bookstagram #bookreview #bookreviews #bookbloggers #bookcover #novel #book #art #typography #experimentalart #literature #bookcovers #graphicdesign #typographicart #typographical
Posted by A.R.Yngve at 4:40 AM