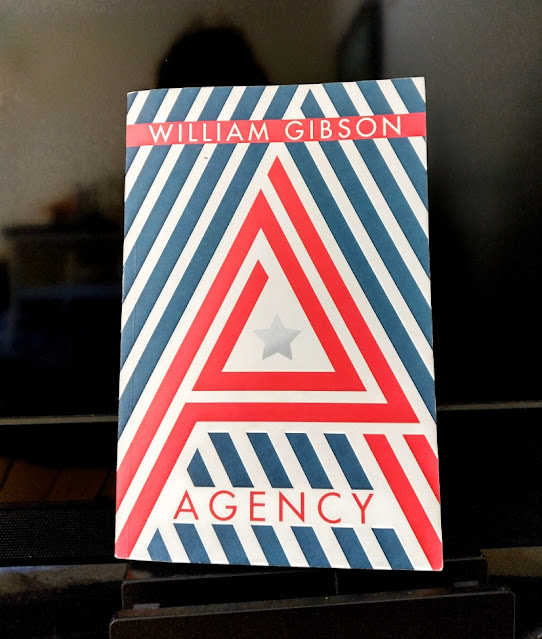 Back when I reviewed Gibson's first novel NEUROMANCER (1984), I noted that it excelled in marvellous visuals, surfaces and textures. I felt it lacked a certain depth, though, and the characters came off as empty and occasionally nihilistic.

Still, that was a novel by a young writer; AGENCY is the work of an older, more mature writer. The elder Gibson still writes more about surfaces than insides, and technology takes center stage, as in NEUROMANCER – but it's as if the real world has caught up with him.

Now we are sort of living in a William Gibson reality, and his signature style seems fit to describe it. He doesn't have to invent fictional data interfaces anymore, because they are all around us. We now have a close, addictive relationship with our digital technology that matches the ”addiction to tech” Gibson described in 1984.

AGENCY takes place in an alternate present, where Hillary Clinton won the 2016 election. The protagonist Verity Jane gets the job to test a new AI which calls itself ”Eunice.” Eunice demonstrates personality, initiative and is on a mysterious mission – the plot revolves around that mission, which may involve saving the world.

It gets even weirder – A LOT weirder – but I don't want to spoil any more. I often found myself admiring Gibson's mastery of style – it's not easy to write like that, about stuff like this, and still make sense – more than the plot itself.

In the end, AGENCY is perhaps more interesting as an ”experience” than as a story. And the experience is so peculiar that only afterward do you start thinking about the story itself and its deeper themes: How we are shaped by technology, the possibilities of artificial intelligence, the menace of climate change – and the uncertainty of our future.

The title "Agency" carries an ironic meaning, which is buried in the story; I leave it to you to figure it out.

Gibson is still enamored with describing technology in loving detail, but I think that's part of his message: that our tools are now running us, and thus they are characters in our lives – perhaps more than we are.