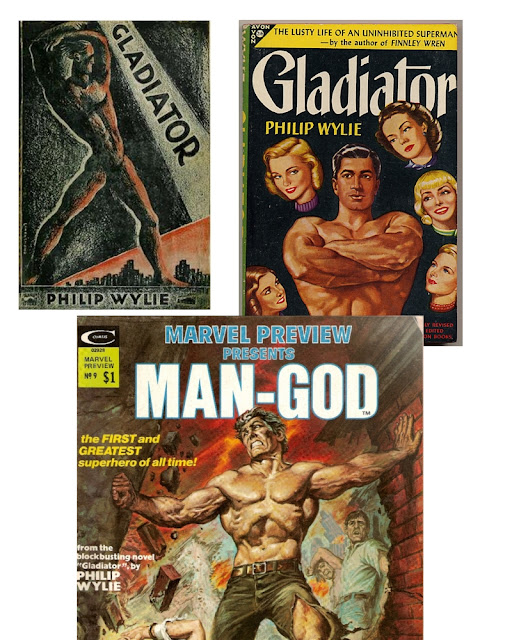 (Shown here are 2 print editions, and a Marvel Comics adaptation)

Who created the superhero genre? Let me rephrase that: Who created and picked apart the concept of the ”American Superman” about 8 years before the comic book Superman?

Today, the author Philip Wylie is mostly remembered for the novel WHEN WORLDS COLLIDE, which was turned into a popular movie. Oddly enough, in a time when superhero movies are all the rage, there is very little talk about Wylie's GLADIATOR.

His novel is a superman ”origin story,” and also a tragic tale of how a superman fails to integrate with society. The hero (or antihero) protagonist isn't from an alien planet, but is born on Earth and gains superhuman strength due to a chemical experiment by his own father.

Remarkably, Wylie describes precisely why a ”caped superhero” couldn't exist in the real world. His superman wants to fit in, but it repeatedly proves impossible – he has to exist at the margins of society and never becomes a crime fighter. This kind of lonely, emotionally tortured protagonist obviously has an appeal to readers who feel alienated... but to the author's credit, he doesn't offer a simplistic power fantasy.

The writing is quite uneven, and the ending comes too abruptly, but the story and characters hold up. It surprised me how much sex there is in this novel, considering it was published in 1930 - and the segment where the protagonist partakes in World War I is gruesome and gory.

Recommended for lovers of 1930s pulp fiction, and those who are curious about the origins of the superhero genre.

NOTE: The novel is now Public Domain and available on
gutenberg.org
and
librivox.org (audiobook).