Book review: THE LONG WAY TO A SMALL ANGRY PLANET by Becky Chambers 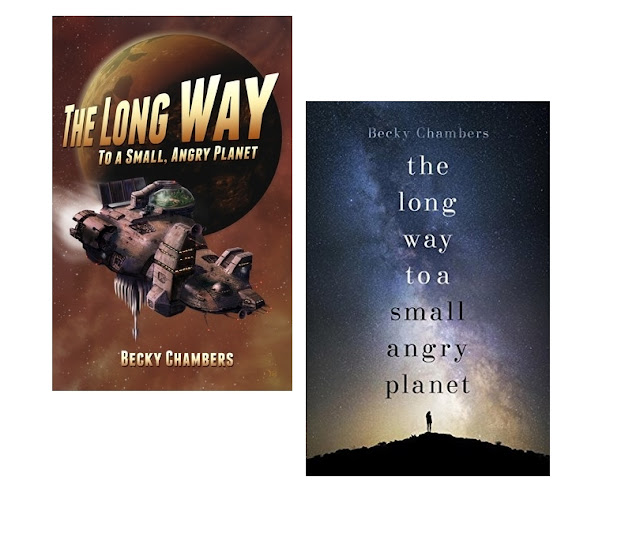 Book review:
THE LONG WAY TO A SMALL ANGRY PLANET (2015) by Becky Chambers

I read this novel and as I soon grew bored with it, I kind of asked myself: Am I the jerk here? The one who’s just small-minded and petty and can’t appreciate the positive vibes in a story where so many different characters can get along and be themselves and validate each other? Surely that’s a message I could get behind...?

But you see, in order to make a story engaging it’s not enough to be right or good or decent. The Hallmark Channel is decent, but I don’t want to watch it. It's not enough to have a single message, even if I basically agree with it.

At the point when the characters went into yet another heart-to-heart talk about their feelings and how much they understood and supported each other, I started to understand that these talks were really what the novel is ”about.” The story didn't have to take place on a spaceship, and the ”alien” characters wouldn't have to be aliens.

Because all the main characters are really just there to assist the principal protagonist – a rich girl who ”goes slumming” among the ”charming and authentic” working class to ”find herself.”

(She is supposed to be from Mars, but she is so obviously a white American upper middle-class woman.)

Someone who had also read the book pointed out the telling detail: This reads like fanfiction. Dead on target!

The lack of plot, the overreliance on borrowed genre tropes, the all-too-human ”alien” characters, the myopic focus on relationships (in the most watered-down sense), the anxious avoidance of genuine conflict and tension between characters, the sex scenes... it all fits into the cliches of fanfiction.

It's not that this novel ”challenges” me – I find it not nearly challenging enough. It wouldn't even have to be violent! Just one outspoken conflict between the characters would have been an improvement.

Just as an example: The ”working-class” characters could have cornered the upper-class protagonist with the tension and resentment that real people can express:

”Hey, rich girl! Why don't you ask your parents for help?”

Judging by the glowing reviews on Amazon and Goodreads, this novel has a fan base. There may be many young readers who need to feel encouraged and validated through fiction. They love this novel, and good for them.

If you're into this sort of ”cosy” space opera aimed at teenagers, or if you like TV shows like FIREFLY and STAR TREK, then I guess you could try it.

I'd prefer something a lot more original and a lot less saccarine.