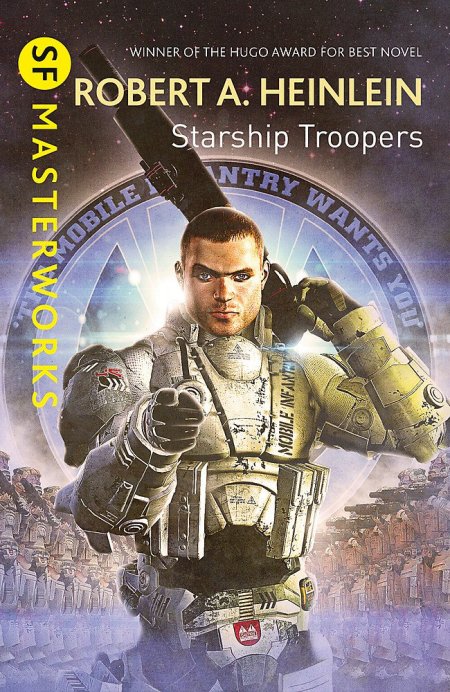 Book review:
STARSHIP TROOPERS (1959) by Robert A. HeinleinThere's exactly one segment in this novel that I think is genuinely good.It's the passage where Heinlein describes in detail a "combat drop" - where the protagonist, a soldier in a future war against aliens called "bugs", fights in mechanized armor. The description of the armor and its user interface was so far ahead of its time, it seems advanced even today.The rest of the novel is a tedious, dishonest bore.I could go into the tedious political sermons, that feel like enduring the reactionary rants from a cranky relative during a family Christmas dinner. (Shut up, Uncle Ezra, nobody wants to hear what you think about bringing back spanking!)I could go into the dishonest depiction of military life... the euphemisms and double-talk that obviously are intended to lull the reader into thinking war is a simplistic, bloodless boys' adventure.But I want to emphasize how boring this book is. There's very little actual combat in it. Mostly it's about the antiseptic, unbelievably conflict-free military life between missions - and the sermons. Those idiotic sermons.Heinlein could write good, even great SF stories. This just isn't one of them. Unfortunately, STARSHIP TROOPERS was a monster hit that spawned a whole militaristic sub-genre of SF... and the less said about it, the better.(For your information: I did military service. My fellow recruits used foul language and did things that would make Heinlein's protagonist faint on a couch.)
If you want to read a good "Military SF" novel, try Haldeman's THE FOREVER WAR.NOTE: The 1997 movie is like a send-up or satire of the novel. Heinlein would've hated it.#robertaheinlein #heinlein #starshiptroopers #bookstagram #bokstagram #bookstagrammer #bookreview #bookreviews #bookcover #bookcovers #sciencefiction #scifi #novel #spacewar #classics #literature #reviews #books #paulverhoeven #movies #starshiptroopersmovie