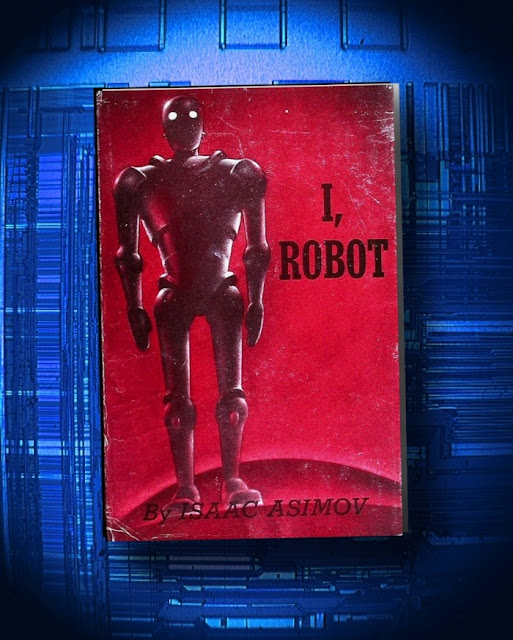 Book review:
I, ROBOT (1950) by Isaac AsimovAn enormously influential classic.
This book is a collection of short stories published between 1940 and 1950, connected by the common theme of how intelligent, benevolent robots enter human society and gradually gain more influence. .In these early robot stories, Asimov introduced the Three Robot Laws - a programming which (presumably) prevents robots from becoming a menace. The Three Laws have since become a common trope in the SF genre. .You can read I, ROBOT mainly as a series of detective stories where the prime suspects are robots, and the human investigators must figure out the logical explanation of a robot "malfunction."

These robot mysteries are entertaining, but seem rather simplistic today. (And the depiction of female characters have in some cases aged badly.)I enjoyed I, ROBOT when I was a kid. I've been asking myself: is it "relevant" today? Perhaps, because robots really are starting to enter our daily lives - though not quite in the way Asimov imagined in the 1940s.

One issue I have with the robots depicted in I, ROBOT is that they are just too flawless to be believable. This has become much more glaring after the year 2000, when real nanocomputers, "expert systems" and self-driving vehicles are being developed.

We can see clearly now that in the real world such machines would "fail" a lot more than the author allowed them to do. The complexity of the real world could frequently overwhelm even the most "logical" robot. (Don't get me started on how an Asimovian robot might handle the infamous "Trolley Problem"!)

Recommended only as light entertainment from the days of old, but should not be taken seriously now.