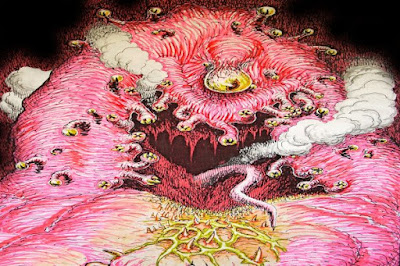 According to witnesses in the town of Inbredburg, the 150-foot tall Presidential/Vice-Presidential candidate swallowed POX News' reporter Sean Inannity - and then rapidly started to dissolve into a reeking, pink, rotting mass, covering an area the size of the Astrodome.

Cleaning up the remains of Nurglon may take months, and the area is currently being sealed off by federal authorities as a bio hazard. A witness to her/its tragic demise was heard saying: "So not even Nurglon could stomach Sean Inannity."

The late talk-show host Sean Inannity, admired by millions of conservative TV viewers, is now being praised by colleagues.

"Sean Inannity was the voice of the real America," says talk-show host Rash Limburger. "His face should be printed on all my little pill boxes, as a tribute."

Barack Obama has so far been unavailable for a comment.

In related news, Nurglon's five million offspring have since fled the country. Unconfirmed reports from Asia claim that the millions of fleeing mini-Nurglons are now storming the coast of North Korea.

Experts are in disagreement whether this would make living conditions in North Korea better or worse.
Posted by A.R.Yngve at 5:06 AM

Nurglon's loss is, well, our loss too. Although there might be a bright side. Did Inannity pass from this mortal dimension with America's shoulda-been next president? I don't see any quotes from him. One can only hope the acidic frothings of cthonic bile at least dissolved his hair gel.