Ms. Sispak had previously told the police that she was attacked by "Socialists" who chopped off her left foot and jammed it into her mouth, and then left her for dead.

However, when local police found the weapon - a chainsaw - covered with only her own bloody fingerprints, Ms. Sispak was questioned again. When confronted with the evidence, she broke down and admitted her deception. She had used the chainsaw to sever her left foot, then stuffed it in her mouth and pretended to be the victim of a gang of "Socialists."

Sispak failed to give a clear explanation of her motive, except that she "only wanted to serve Nurglon, mistress of Great Cthulhu and a true American hero."

The girl's father, noted Nurglon volunteer Joe-Bob Sispak, claims in a statement that the police had "waterboarded" his daughter to make her lie about the crime, and added:

"Us real Americans must avenge my baby girl for putting her foot in her mouth!" 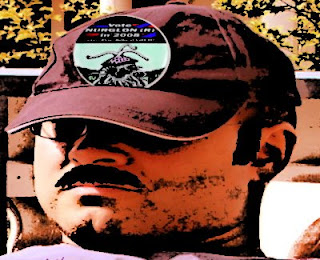 Who would win in a fight with Nurglon vs. the Flying Spaghetti Monster? My bet's on Nurglon, because of her appetite, but I'm open to counter-arguments.

Also, is there any chance of Nurglon eating Sean Inannity at the conclusion of an interview? He's put on some weight, so I think he'd be tender.

The mind boggles... Is there, in this universe or another, something or someone that can stomach Sean Inannity of POX News..???
:-o
[Cue TWILIGHT ZONE music]