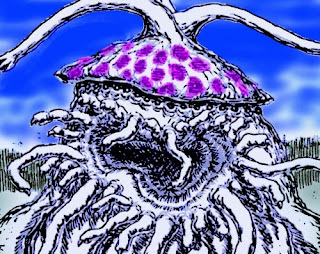 POX News, Oct. 11: Witnesses at Nurglon's most recent public speech have heard cries for help from inside Nurglon's giant, gaping mouth, which may come from the missing John McCain.
The witnesses said that while they were listening to Nurglon (r) speaking, they heard muffled shouts from somewhere along its/her middle row of teeth (Nurglon has three known rows of teeth, each counting approx. 200 claw-like molars) - and that it sounded like McCain's voice.
According to witnesses, the shouts sounded something like, "Help! Help! I'm stuck between her teeth and I can't get out!" and "Somebody help! She's eating the entire party!"
POX News has asked several prominent dentists if it would be possible to extract a person alive from Nurglon's jaws. They all declined to answer.
--------------------------------------
Related stories:
Nurglon Speaks...
Nurglons Slams Obama...
Nurglon Denies...
Nurglon claims...
Nurglon supporters claim...
Posted by A.R.Yngve at 2:24 PM