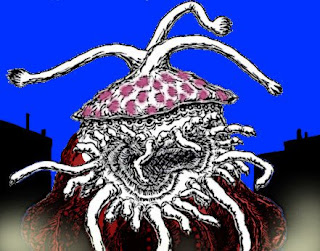 Presidential/Vice Presidential candidate Nurglon (r), who usually does not wear clothes, has now taken to fashion.

But Nurglon's new style may come at a high cost to the U.S. economy, warn financial analysts. Many of them are afraid to criticize Nurglon openly.

"It's not just a question of running out of campaign funds," says a source who wishes to remain anonymous. "The Republican Party has taken huge short-term loans to pay for Nurglon's dresses, and staked everything on her winning the election. If she doesn't win and can't create bailout packages to cover the debts, the GOP goes bankrupt."

"And none of the money paid for these gigantic garments goes back into the U.S. economy. Thousands of Chinese textile workers are employed to make them. India exports 5% of the fabrics it produces to America for Nurglon clothing alone."

"This textile and clothing bubble has been growing way too fast, and could burst on Election Day."
Posted by A.R.Yngve at 10:49 PM