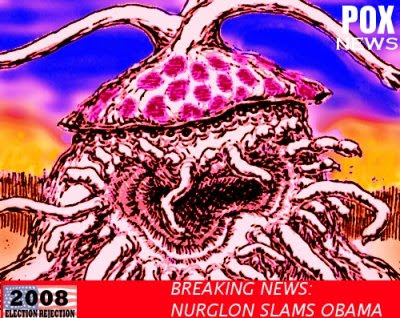 In a follow-up to her/its recent tell-all interview for POX News' Sean Inannity, Presidential and Vice Presidential candidate Nurglon (r) slams Barack Obama for being "unqualified" for the military responsibilities of the presidency:
Q: Nurglon, do you have anything to add to your previous comments about your opponent, Barack Obama?
Nurglon: THE SHINING ONE IS WEAK! WEAK!! HIS PITIFUL HUMAN CONSCIENCE FORBIDS HIM TO WAGE TOTAL WAR ON MANKIND, AS I SHALL WHEN I AM ELECTED!
Q: When you say "total war," do you mean the states which sponsor Al-Qaeda in the War On Terror?
N: NO. THE OTHER ENEMY.
Q: Which other enemy?
N: LIFE.
Countless conservative bloggers and pundits have praised Nurglon for this statement, which they claim as proof of Nurglon's necessary "toughness" to rule America. To quote one blogger: "Nurglon in '08! You're either with her or against her!"
----------
Related posts:
Nurglon Speaks...
Nurglon Denies...
Posted by A.R.Yngve at 4:12 AM