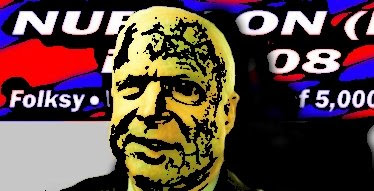 In an exclusive statement to POX News before the third and final 2008 presidential debate, Presidential/Vice Presidential candidate Nurglon (r) declared that John McCain has now been turned into a zombie and released from Nurglon's mouth.

Nurglon said:
"THE McCAIN CORPSE SHALL DO MY BIDDING. IT SHALL EXPOSE THE SHINING ONE AS AN ENEMY OF ALL THAT I STAND FOR... FAMILY VALUES, FAITH, STRONG LEADERSHIP, FOLKSINESS AND STRAIGHT TALK."

When asked to clarify, Nurglon only added:
"BOW DOWN AND WORSHIP NURGLON, GOSHDARN IT."