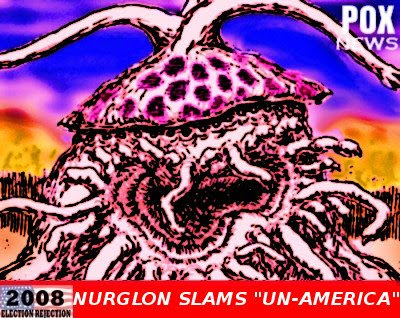 In a recent blitz of open-air rallies across rural America, Presidential/Vice Presidential candidate Nurglon (r) has launched the concept of "Un-America."

At Nurglon's most recent small-town appearance in Rottenville, a POX News' reporter heard the following speech:

N: ON THE COASTLINES, IN THE BIG CITIES, LIES... UN-AMERICA! CITIES THAT ARE ELITIST, HARD-HEARTED... AND HARD TO CHEW!

N: WHEN I AM ELECTED PRESIDENT, I SHALL ORDER MY FIVE MILLION YOUNG TO EAT UN-AMERICA! WITH A SIDE ORDER OF SOCIALISM!

N: AND THEN THIS GREAT NATION SHALL BE PERFECT AGAIN, FOLKS! YOU BETCHA!